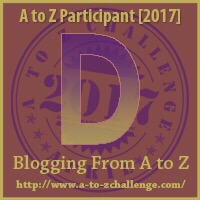 [image description: brown background with a stamp of the A to Z challenge in the background. Writing on the top reads “A to Z participant (2017) then there is a large capital letter ‘D’ in the middle. Below the ‘D’ it reads “blogging from A to Z” below that it reads “http://www.a-to-zchallenge.com/ end of image description.]

If you know me, you know I love history. Yes the Tudor period in particular, but I do also love history in general.

I remember as a child of about 6 every night whilst eating dinner with my family telling them what I had learnt about the ancient Egyptians pulling peoples brains out with a hook through their nose before burying them.

History just made sense, in a world filled with people that made no sense and was scary, history made sense and made me feel safe and happy.

People often ask me why the Tudor period in particular, why not the normans, or the world wars, the Cold War, the Stuart’s. And there is a half answer, I find the Tudor period more fascinating than any other period I have ever learnt about. Yet I also do not know and I don’t think I’ll ever fully know.

I don’t think the things we are interested in often have a specific reason for us being interested in them. We just are. Although yes I realise my love for the tudors is probably more intense than many people’s interests, and yes I could talk for hours about the Tudor period and not get bored.

History also offers me something else, a sense of safety and security.

History won’t change, yes we may discover new information about something, but overall it isn’t going to change. Anne Boleyn will always have been executed at, just after 9am Friday 19th may 1536.

It is factual, I can fill my head with learning dates and facts, information that makes me so very happy.

History for me makes sense and history, but especially the Tudor period makes me happy. So actually whether there is a specific reason why I like history or not it doesn’t matter, because it makes me happy.

6 thoughts on “D is for Dates-history and me  #atozchallenge ”

Follow The Tudors make me tic on WordPress.com
Join 93 other followers