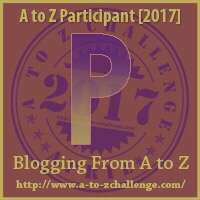 [image description: brown background with a stamp of the A to Z challenge in the background. Writing on the top reads “A to Z participant (2017) then there is a large capital letter ‘P’ in the middle. Below the ‘P’ it reads “blogging from A to Z” below that it reads “http://www.a-to-zchallenge.com/ end of image description.]

Over the last year or so I have started to write poetry.

A lot of the poems I write are very linked to parts of my life and are a way for me to express myself.

Here I am going to share a few of my poems and explain a little about each one and why I felt it necessary to need to express what is within these poems.

To so many immediately a wheelchair equalled giving up and a loss of freedom, this poem expresses what was said to me by those people, but it also counteracts that with the reason why a wheelchair is better and gives me my freedom back.

But others don’t see it that way

But others think of you as a restriction.

But others only see what I now can’t do

But others don’t see the benefits.

I can leave my flat.

But others see you as a negative

But others think you have destroyed my life.

But for others you’re an embarrassment

But others want you gone, openly tell me so.

My reason for less exhaustion.

My reason I don’t get stuck in public and have to crawl.

Yes, I can’t hike up a mountain,

But without you I’d be stuck indoors.

I know you’re not restricting me.

Without you, I’m restricted so much more.

I’ve done the opposite

It’s not my fault the world isn’t designed for you.

That dropped kerbs are often blocked.

That places are often too narrow.

The world just hasn’t caught up yet.

Far too often Tourette’s is used as a joke, or seen as a joke. People decide it is just about swearing and so often the fact that it is a disability seems ridiculous to many. I wanted a way to get across to people what Tourette’s really is, how it really isn’t funny having Tourette’s and how it causes pain, exhaustion. So I decided a poem where I list a lot of various tics (and actually as I was writing it I was writing down tics that I had literally just done, so it was very real) I wanted to also get across the sense of how frequent tics can be for some of us, this is why near the end I talk about the space of time of the tics.

My neck snaps back,

My neck suddenly flicks to the side and I feel a click and pain.

Now my neck is constantly nodding.

And toes start to jump about.

My finger flips up at an unaware passerby.

I’ve not got a cold.

And, no blowing my nose doesn’t help!

Some end up forming sentences.

I say the strangest of things.

‘You’ve got a chicken on your head’

The time all this happens in?

This final poem is about learning (and trying to remember) that I am ok and enough as I am. Growing up, throughout my childhood and then as a young adult too, I got the message from all around me (whether they meant it or not) that I am not good enough as the person I am and that to stop being bulled and known as the weird kid I should change to fit in and make myself be liked more.

This is about how people wanted me to not be myself and how actually that didn’t mean I would get friends and ultimately starting to learn that I am ok as I am and I have a few friends now who don’t express wanting me to change in anyway.

You told me to

not talk about history

not talk about classical music

So I tried it all

I tried so damn hard

so I tried it all to fit in how you wanted me to.

I wanted to be liked

I wanted a few friends

I know I’m liked as me

The friendships I have now are genuine

as I’m no longer faking who I am.

I have mental illnesses and that’s ok

I have Tourette’s and that’s ok

I stim and that’s ok

I have sensory overloads and that’s ok

I have meltdowns and that’s ok

I know I love history and that’s ok

I don’t want to drink alcohol and that’s ok

I love my beard and that’s ok

I know my limits and that’s ok

I know I can’t cope with many things

Every time you told me to fit in

to avoid being the bullied, abused person with no friends

but any friends I had weren’t true friends who cared.

I know now that I can be myself

Because you all lied to me.

and that’s ok.
I now know

I don’t need to fit in to have friends

I also know I’m not less